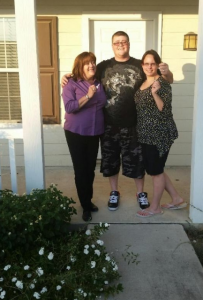 Please meet David S., another one of our success stories.

When David was just a minor, he was a part of a class action lawsuit in which he was awarded a structured settlement. David receives monthly payments from the settlement and needed a greater amount of money to fulfill his dream of being a homeowner.

David called Liberty Settlement Funding and spoke with Account Executive Christopher.  David spoke with Christopher about his goal of becoming a homeowner. Christopher took a look into David’s payment stream and provided him with a detailed plan to obtain the most money from selling only a portion of his structured settlement.

After the deal was completed, David and his wife were able to purchase a house with the lump sum of money they received from Liberty. Now, they live in their beautiful dream home. But that’s not all David was able to accomplish. David was also able to pay off his auto loan, reduce his medical bills, and even fund his hip replacement.

Liberty reached out to David to get some feedback on his experience with us. David expressed to us how pleased he was with the entire process. He explained that it was quick, efficient, and ultimately a dream come true.

Here is a photo of David and his family today, holding the key to their new home.