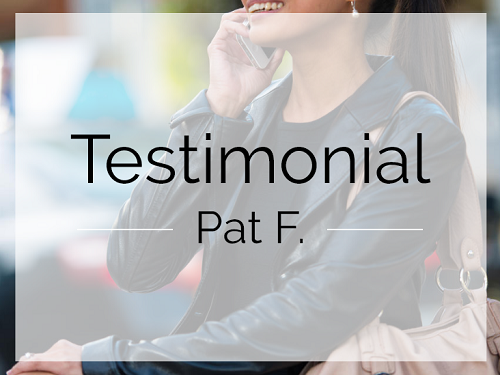 Pat’s mother, Rosemary, received monthly payments from an annuity she had purchased years ago. Unfortunately, Rosemary’s health began to decline. As a result, she appointed Pat as her power of attorney and Pat became her mom’s primary caretaker.

As Rosemary’s health continued to decline, Pat reached a point where she could not afford to provide Rosemary with the quality of care Pat thought her mother needed and deserved.  Even though they were receiving monthly payments from the self-owned annuity, these payments proved insufficient to afford quality care.  Running out of options on how to address the situation, Pat decided to look into selling the annuity payments.

Pat was unfamiliar with the process of selling annuity payments for a lump sum of money.  She did what many people in this situation do.  She went online and began doing research.  Pat was looking for a reputable company to work with.  She wanted to find a company that would understand her needs and would be honest with her.  Pat was facing a very important decision, one that would ultimately improve her mother’s healthcare and overall quality of life. Pat found Liberty Settlement Funding’s website.  After she read the reviews and previous customer testimonials, Pat decided to give Liberty a call.

Account executive, Christina, had the pleasure of answering Pat’s phone call that day. They spoke on the phone for quite some time and came up with a plan together.  Christina worked side by side with Pat and her mother to get them the most money out of their annuity.  Pat was able to use the funds to afford care for her mother in a skilled nursing facility.

“Christina was the one who I first spoke to, and she was there until it was finalized.  She was so very professional, and at the same time, so caring.  There were many times when I called her crying on the phone, and she was always there to help.  Every time I called she answered my questions and explained everything to me.  As I mentioned before, I knew nothing about what I was doing, and she got me through.”

Since Pat received the lump sum of money from Liberty Settlement Funding, she has placed her mother in a skilled nursing facility that offers outstanding care for her mother. We spoke with Pat after her deal was completed to ensure her experience with Liberty and her Account Executive Christina was satisfactory. Pat expressed how happy she and her mother are to have the opportunity to work with Christina and Liberty Settlement Funding.

“Liberty is lucky to have a dedicated employee such as Christina and one who knows as much as she knows.  I would recommend her to anyone.”

← Testimonial: Marlon B.
How Your Settlement Can Help Further Your Education →